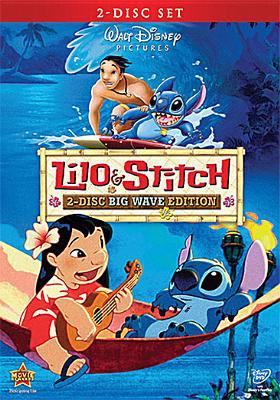 Spencer, Clark
Genre:
An evil creator has created a little creature by genetic experimentation. The creator and creature are sent to prison. The creature escapes and heads for Earth where he tries to impersonate a dog. Bent on self preservation, he plans to use a human shield to protect him from the aliens sent to recapture him. Earth girl, Lilo, adopts the 'dog, ' gives him the name Stitch, and actually developes an emotional attachment to the little creature. Lilo's dysfunctional family consists only of her sister Nani, but the two are about to be ripped apart by social worker Cobra Bubbles. Stitch, as the new family member, brings quite some action into all their lives, and after a while not even the aliens can recognize their former target.

Special features: Deleted scenes; "Your 'Ohana" music video featuring The Hawaiian Chorus; "The story room:" an interactive behind-the-scenes look at the making of the film; Lilo & Stitch Island Adventure games; "A Stitch in time:" follow Stitch through the Disney years; "I can't help falling in love with you" music video performed by A-Teens; DisneyPedia: Hawaii-- the islands of Aloha: explore the Hawaiian Islands.

English, dubbed French or dubbed Spanish dialogue with optional French or Spanish subtitles and optional English subtitles for the deaf and hard of hearing; closed-captioned.