"The Complete Works of William Shakespeare, Abridged and Revised” at the Macon County Public Library 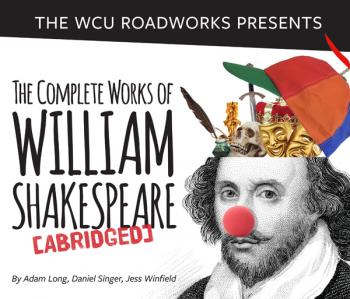 The show features three actors ― WCU students Sarina Montgomery in the role of Daniel, Sarah Luckadoo as Jess, and Libby Rounds as Adam ― for all 37 Plays in one sitting! An irreverent, fast-paced romp through the Bard’s plays, The Complete Works of William Shakespeare (abridged) [revised] was London’s longest-running comedy having clocked a very palpable nine years in London’s West End at the Criterion Theatre!

Join these madcap players in tights as they weave their wicked way through all of Shakespeare’s Comedies, Histories and Tragedies in one wild ride that will leave you breathless and helpless with laughter.