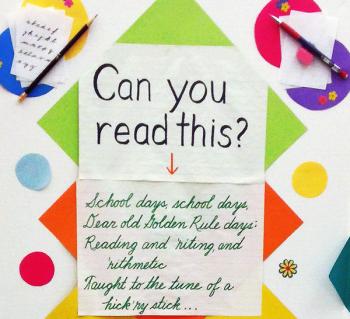 National Handwriting Day will be celebrated with a workshop on cursive writing at 1:00 p.m., Saturday, January 23rd at the Macon County Public Library at 149 Siler Farm Road. National Handwriting Day was established in 1977 and is celebrated on the birthday of John Hancock, the American founding father remembered for his iconic signature on the Declaration of Independence.

Marion Maynard, a resident of Franklin, will be teaching the series of lessons. The two hour sessions are free and open to all over the age of 10.

“Handwriting is becoming a lost art,” Mrs. Maynard said. “Cursive writing is no longer required in state curricula, so some teachers choose not to teach it. I can see a time in the future when the average person will be unable to decipher family memorabilia,” Maynard said. What a shame to have a treasured letter and not be able to read it”.

“It occurred to me that I had a skill that was disappearing in our culture,” she said. “Early last fall, in talking with Tammara Talley at the county extension office, we came up with a plan to offer a cursive writing class. Although the class was small, it was a success and all students could read and write cursive at the end of the lessons”. That led Maynard to want to offer more classes.

Maynard readily admits to having no formal teaching education but she was a teacher’s aide for several years in an elementary school. She also taught both her children to read before they entered kindergarten.

A friend recently returned to her an 8 page handwritten letter Maynard wrote nearly 30 years ago. “Whenever I get a note from you,” the friend said, “I know at a glance at the envelope that it’s from you”.

“Cursive handwriting is a practical skill as well as an art,” Maynard said. “I’m passionate about sharing its importance”.

Class meeting days and times may be adjusted at the first meeting to better suit the class. You may sign up by calling Mrs. Maynard at 369-9573 or by registering at the Macon County Public Library’s Circulation Desk: 828-524-3600.