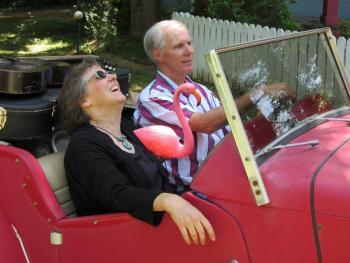 The Jackson County Public Library is hosting a musical concert featuring Karen "Sugar" Barnes and Dave Magill on Thursday May 26th at 7 PM in the Community Room. This program is free of charge.

Karen “Sugar” Barnes was born in Washington, DC, the daughter of lap-steel player, Three-Finger Dean Young. It was Young who first introduced her to a Harmony guitar and from that point, Barnes focused on learning music and theater. She attended the North Carolina School of the Arts, taught theater, and performed in other parts of North Carolina. In 1999, Ms. Barnes began researching and performing traditional women’s blues. She loved learning about early blues women like Bessie Smith, Etta Baker, and Algia Mae Hinton. She also learned to play a single-string slide guitar.

Sugar Barnes has been a featured musician at MerleFest and many local festivals including: Cullowhee!; Greening Up the Mountains; the Strawberry Jam; and, Bryson City’s Fiddler’s Convention. Sugar Barnes resides in Jackson County.

Dave Magill began his musical career playing folk music in Boston coffeehouses. He played in several New England bands before heading to Austin, Texas in 1973. For the next 25 years he traveled the southwest performing classical and contemporary country music on bass, guitar, and piano. Magill now divides his time between engineering, and being resident studio musician at the Music Room in Webster, NC. Ms. Barnes and Mr. Magill have been working together for several years delivering folk, blues, and country performances throughout western North Carolina.

This program is free and open to the public. The event is co-sponsored by the Friends of the Jackson County Public Library. For more information, please call the library at (828) 586-2016.