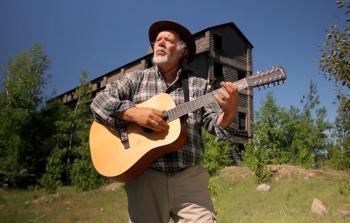 As part of a summer series of music, the Marianna Black Library is proud to present “A Songcatcher’s Notebook: Traditional Music and Storytelling” with Lee Knight on Thursday, August 11th, at 7:00 PM.  Weather permitting, this program will be presented on the front lawn of the library, otherwise it will be moved to the library auditorium.

Raised in the Adirondack Mountains of upstate New York, Lee became interested in traditional folk music as a young man and soon found himself to be an amateur folklorist. During college, he became familiar with the music and stories of the Southern Appalachian Mountains, as well as of the Adirondacks. He wanted to learn the music and stories from traditional sources--people who had them as part of their culture and community for generations. He also collected songs and stories from other parts of the world, including England, Scotland, Central Asia, Columbia and the Amazon region of Peru and has recently released his third cd, “An Untraditional Journey.”
Lee currently works as a folk singer, story teller and outdoor leader, performing at concerts, workshops, Elderhostels, festivals, camps and schools. He leads hikes, canoe trips and guides whitewater rafts. He plays various instruments, including the fretless five-string banjo, various guitars, the Appalachian dulcimer, the mouth bow, the Cherokee flute and the Cherokee rattle, as well as the Native American drum.

This program is free and open to area residents and visitors.  Please join us for an evening of great traditional music on the front lawn of the Marianna Black Library. The library is located in Downtown Bryson City at the corner of Academy and Rector.  For more information or driving directions call the library at (828) 488-3030 or visit www.fontanalib.org/brysoncity.