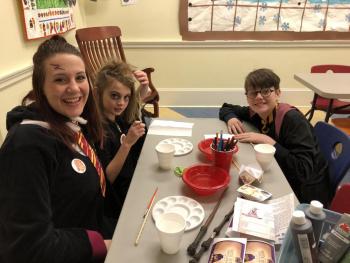 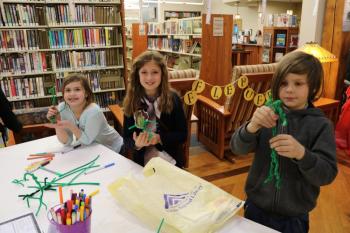 Would you rather… Duel Dumbledore or Voldemort?

Children at the Macon and Jackson County Public Libraries joined libraries and bookstores around the world to celebrate the fourth annual Harry Potter Book Night on February 1, 2018.  This unforgettable night was themed around Fantastic Beasts.

At the Macon County Public Library, wizards, witches, and muggles were treated to an evening of fantastic activities, magic tricks, and readings from our favorite Harry Potter books! It all began when the Sorting Hat decided who would be in which house, and then the students rotated through magical classes.  We transformed the library into Hogwarts, as well as served up snacks inspired by some of the scrumptious wizard foods in the books.  Everyone was also encouraged to dress up as a Harry Potter book character for our costume contest.

At the Jackson County Public Library, wizards, witches, and muggles enjoyed butterbeer — a favorite famous drink from the series — while playing trivia bingo, a polyjuice potion game, and Would You Rather? (Hogwarts edition).  Later in the evening, students were able to sort themselves into houses via their origami sorting hats and then duel using their newly created wands.