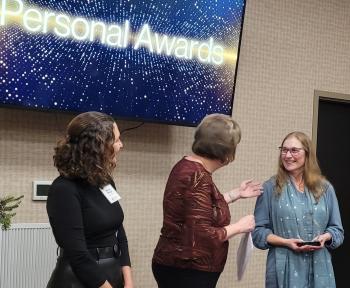 Karen Wallace, Director of Fontana Regional Library, has been awarded the most prestigious statewide honor by the NC Public Library Directors Association (NCPLDA). The award was presented at their 2022 Awards Banquet in Winston-Salem.

Over the past 30 years Wallace has exemplified the very definition of leadership, not only for the Fontana Regional Library (FRL) but for libraries and librarians across the state. She became the Macon County Librarian in 1992 and since 2006, she has held the dual role as Macon County Librarian and Regional Library Director. She serves as a mentor for the profession, encouraging employee promotions from within FRL, giving staff opportunities to learn, giving support and encouragement, and offering leadership and advice. Wallace has contributed to the growth and development of FRL on multiple levels that transcend library walls and creates a stronger community through leadership, innovation, programming, customer service, access, and facilities.

Karen has consistently worked hard to achieve grants for projects that enhance library services in meaningful ways. FRL’s Digital Seniors project was nationally recognized in 2022 by the Southeastern Association of Area Agencies on Aging (SE4A) who acknowledged services to older adults. The goal was to provide seniors with both the technology (including internet connectivity) and the skills they need to use digital devices to explore the internet in a way that is meaningful to them on an individual basis. The Library provided initial home set-up and ongoing one-on-one instruction for using a Chromebook and wi-fi hotspot. Since 2020, FRL has received $572,000 from local, state, and federal grants to support various projects that directly benefit residents of Macon, Jackson, and Swain counties.

Karen Wallace’s impact on FRL’s community has been enduring as well as significant. North Carolina libraries across the state have benefited from her experience, as she has served on the NC Cardinal Governance Committee, State Library Commission and as the Regional Library Representative for NCPLDA. The NCPLDA committee stated, “It is a privilege to acknowledge Karen Wallace as Director of the Year for her steadfast leadership, positive attitude, and commitment to serving others.”