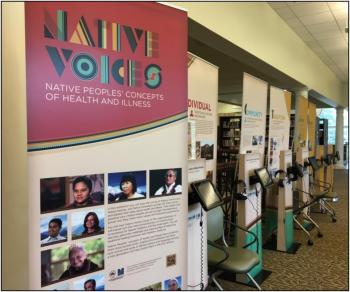 From June 23rd until July 31st, the Jackson County Public Library hosted the national exhibit Native Voices: Native Peoples’ Concepts of Health and Illness. The Native Voices traveling exhibition, produced by the National Library of Medicine and the American Library Association, explores the connection between wellness, illness, and cultural life through a combination of interviews with Native people, artwork, objects, and interactive media. The exhibit was viewed by several hundred people during its time in Sylva. The Jackson County Public Library provided Cherokee-centric programming along with the exhibit. Some of the speakers lending their expertise to Native Voices were Sarah Sneed, Julie Reed, and Vickie Bradley. Benjamin Woody, the JCPL Adult Services Supervisor and Native Voices Project Director says, “It is truly an honor for the Jackson County Public Library to have hosted the Native Voices exhibit. We are the first library of our size to host the exhibit. This year, the Native Voices exhibit visited Baltimore, Philadelphia, and Sylva. We especially want to thank the community, our presenters and collaborators, and Lisa Lefler, Director of Culturally Based Native Health Programs at WCU, who partnered with us to present this exhibit.”

Read it in the Fall 2017 Edition of the Fontana Flyer