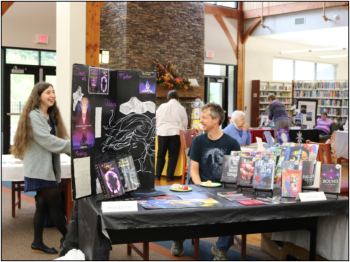 The big change over last year was moving the date from November to early September.  This was done to try and capture more of the “seasonal” population, as it was pointed out that most of this potential audience is gone in early November.

Approximately 345 attended the fair (about 150 more than last year); we will probably continue with the earlier date, due to this increase.

Promotion was done inside the library, in downtown Franklin, two featured newspaper articles, and on the internet.  We were able to get radio coverage and an additional newspaper article beyond what coverage we had last year. Posters were also displayed throughout the community, including ‘real estate’ signs, and social media (such as Facebook) was employed more than ever before.

Feedback from our 29 authors was uniformly good; sales figures, as reported by our partner Books Unlimited, were also improved over last year.

As always with this event, our intent is to support our local economy (part of our long range plan)  [Employment and Economy] with book sales of local authors, as well as creating a community event highlighting books and reading [long range plan of Education/lifelong learning and also Recreation/Leisure Services].

Read it in the Winter 2017 Edition of the Fontana Flyer

Tax Assistance at Your Library

Did You Know the Library Can Help Your Small Business?

“A Day for Writers” Conference